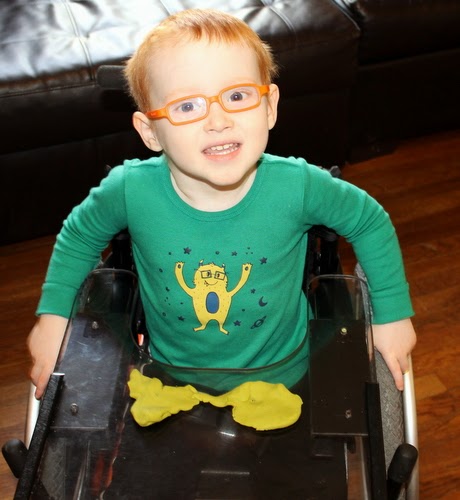 Things for Mason have been fairly quiet since I last posted here.  He breezed through the week following the IV infusion of osteoporosis medication with mild symptoms.  At the same time I, Mason's mommy, have been dealing with my own medical emergency, which you can read more about on my regular blog here and here.  As things have settled down we have been thrilled to see Mason making a lot of progress in his physical development.

If you remember, months ago Mason had tendon surgeries for his right hip and heel.  Two months of casts and broken bones from those casts later he was finally able to move around again, only to discover he had lost both strength and ability.  The cut tendons in his hip have affected his ability to move that hip/leg.  The lost strength in combination meant my sweet boy could no longer climb up steps, transfer into and out of his wheelchair, or do anything using similar muscle work.  We have done weekly physical therapy with a new PT and developed some exercise play routines here at home with the therapist.  Mason's hard work is paying off! 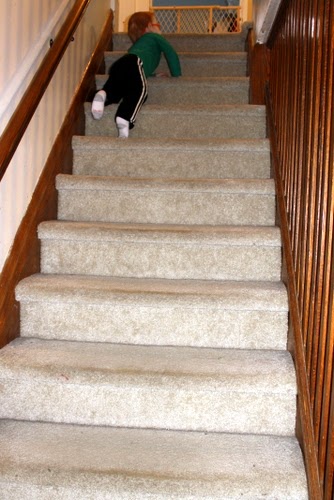 Here he is, climbing our flight of 13 steps so he can go play upstairs in the bedrooms.  Without help (other than a spotter to make sure he doesn't slip and fall).  He's so proud of his ability.  He loves the freedom to go play upstairs without being carried there, especially right now as the large tub of Legos have been brought out of the attic. 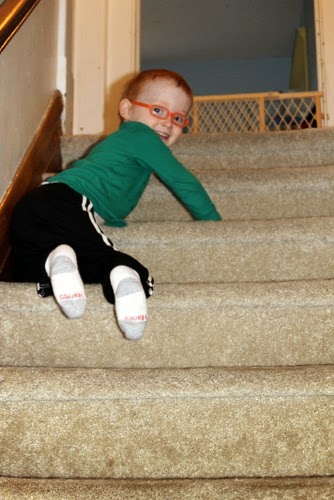 Unfortunately for this momma heart he has also decided he can climb DOWN that flight of 13 steps, so I regularly hear him calling, "I come down.  Legs, mom.  Legs first."  Then I rush over to find him backing up on his belly to go down legs first.  He's getting better at it.  At this point he needs someone with him for every step down because if he gets distracted he starts moving too fast and his bottom moves faster than his legs and then he falls backward.  Where we catch him.

I know in my head this growing independence is a good thing.  I cheer him on.  He's learning to do things we want him to do.  I just wish he were in a padded suit while attempting them!
Posted by Tristan at 3:28 PM