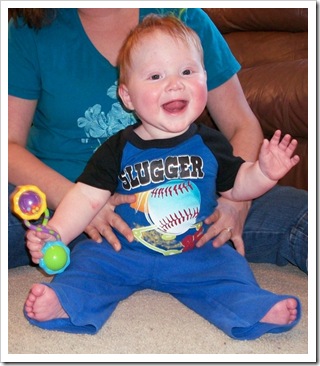 Who can worry when they wake up to
this cheerful face every day?

It always amazes me how quickly time flies with babies.  Even after seven children it catches me by surprise.  Mason has been in our arms for eight months.  The many things I worried about and cried over in the beginning have become routine.  What I once thought would be hard forever is now only hard occasionally.  Mason is our strong, smart little man and I cannot imagine life without him.

I have a few updates since last week, so let me tell you what has been going on with Mason.  If you remember, he seems to be allergic to cow’s milk to some degree (evidenced by eczema over his whole body).  We switched to Alimentum, an expensive formula for food allergies.  It has helped his eczema a good bit but sent him into runny poops that have broken down the skin on his bottom again (bleeding, raw skin).  We also learned Alimentum has some dairy proteins that have been broken down a lot and most children won’t have trouble with.  Mason seems to be in the minority.  His eczema got better but it’s still bad in a few trouble areas no matter what we do for it.

We were told soy formula would constipate him, a problem because of weak muscles from the SB. We decided that constipation is easier to remedy than broken down skin on his bottom, so we tried soy formula this week.  Within 24 hours Mason had a rash from head to toe.  Apparently he’s allergic to soy too.  He’s back on Alimentum for now.  Mason has zero interest in eating solids of any kind.  Eating solids would firm up his poop so his bottom could heal, which is why we wish he wanted to eat.  We’re adding baby oatmeal to 1-2 bottles per day trying to find a temporary measure to firm poop until he’s ready for solids.  It seems to be working. 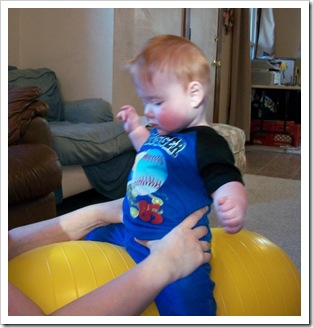 In the physical therapy department we have seen small progress this week in the sitting department.  Mason still cannot sit on his own.  He is getting the idea though. 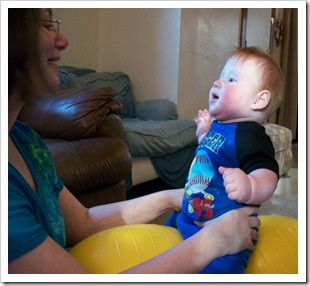 As we’ve diligently done his exercises throughout the day he now recognizes that sitting upright instead of leaning forward on his hands is an option.  Of course it means he wants in this position all the time, even when mommy is supposed to be doing other things. 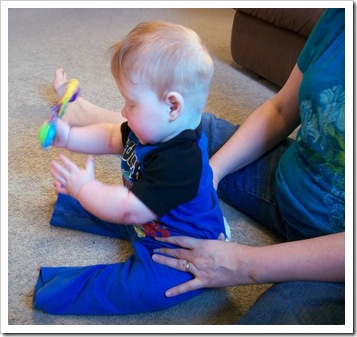 (see that nice straight back???)

With our hands supporting his hips he now wants to sit upright and play with toys in his hands.  He doesn’t feel like he has to keep those hands on the floor.  This is such a big step for Mason.  He has a long way to go before his muscles will be strong enough to stay upright without help, but he is heading in the right direction. 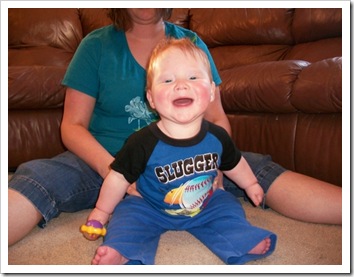 He wobbles and sways and falls forward like this a lot.  He is starting to ‘recover’ about 1/3 of the time when the swaying starts, finding his balance and straightening: 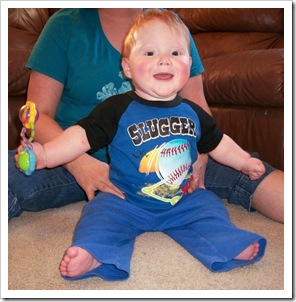 This is one thing that has been an adjustment with Mason compared to our other children.  I never had to pay attention to developmental milestones or help a child reach a new milestone with specific daily physical therapy.  They managed on their own.  With Mason I have to be aware of what he can do, what big skill he’ll be learning next, and the mini-skills inbetween that he needs to master to do those bigger skills.  It is amazing to learn the many things that go into one single skill like sitting up!