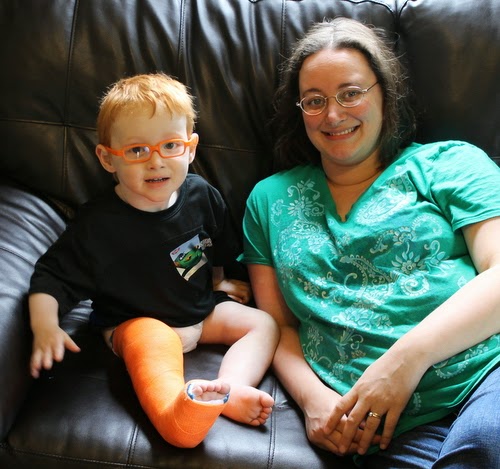 You wouldn't think after just a few days that I would have a lot more news about Mason, right?  Well Mason managed to spend 15 hours at the doctors and the emergency room in the last 3 days.  Did you notice he's now in a long orange cast again instead of the short purple one?  Let me tell you the story.  It is a crazy one in true medically complicated style!

Saturday evening Mason's leg just above the short cast became swollen, very swollen.  Mommy and Mason headed to the ER to have the purple cast removed.  After a long, drawn out visit the doctor in the ER decided Mason just needed to wear a short splint for the next week and we could forgo another cast.  We were told the swelling should begin to go down and if it did not, to come back to the ER or go in to see the orthopedic surgeon if it was during the workweek.  They did not check anything, they just sent us home.  When we got home I removed the splint (which was on to keep his heel stretched out in the final week of post-surgery recovery) and left it off all night to help the swelling go down.  The plan was to put it back on in the morning.

Sunday morning found Mason's entire lower leg was now swollen and hot to the touch.  The knee area was not better at all either.  We headed back in to the emergency room.  The ER doctor and orthopedic resident there were not convinced something was wrong but agreed to do an x-ray and possibly run labs to check for infection.

A while passed after Mason's x-ray before the doctor and resident returned.  The x-ray looked fine to them and Mason was just going to be sent home to let the swelling go down.  I refused and insisted that they get someone qualified to read the x-rays because the swelling was NOT normal.  They disappeared, grudgingly seeking a second opinion.  More time passed.

Finally, a less than sure of himself doctor and resident returned to tell me I was right.  They had not noticed the broken tibia the first time they looked at the x-rays, but having a broken leg did explain the swelling.  There was also something they didn't quite know how to explain on his femur.  They did blood work to check for infection and put Mason in a long leg splint with the suggestion that we contact his orthopedic surgeon the next day for a cast.

That brings us to today, Monday.  Mason and I headed in to see Dr. K this morning.  Dr. K examined the x-rays, took comparison x-rays of the other leg, and came in to chat.  Yes, Mason broke the growth plate on his tibia.  He also apparently broke his femur at some point in the past (thigh bone) but it has healed on its own!  This has been one of my biggest worries related to Mason - that he would hurt himself and not be able to tell because he can't feel it.

Because Mason is non-weight bearing, he cannot stand or walk, his leg bones are more brittle than they should be.  They can be broken easily.  They think the tibia brake, which is along the line of where the purple short cast ended, happened when he hit or bumped the cast just right some time when playing on Saturday.  They have no idea when he broke his femur but it has healed well.

The treatment plan for the broken tibia is a long leg cast for at least the next 4 weeks. When we come back in they will do an x-ray to see how it is healing and hopefully we will be done with the cast then.  We will just have to wait and see.  One fun thing today is that Mommy got to glove up and help cast Mason's leg.  He thought it was the greatest thing and really all I had to do was hold his leg and foot in position.

This highlights one of the reasons we did Mason's last surgery (foot and hip).  We needed to do those so he can get leg bracing again to use in his stander.  Standing with the bracing will be the only way Mason can bear weight on his legs.  He needs to bear weight to strengthen his leg bones so he can hopefully avoid easily broken bones.  Medically complicated certainly describes Mason!

He is feeling just fine.  He cannot feel the broken leg at all.  He was happy to get to choose a new cast color.  I'm praying it is the last one!
Posted by Tristan at 2:38 PM