More Standing and Many Straps 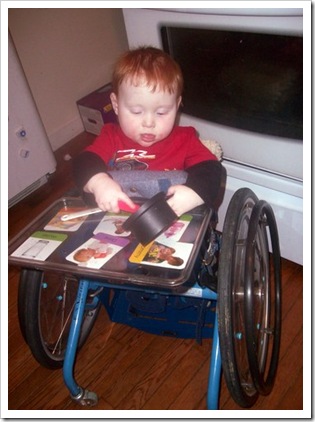 Ahh, my sweet little man has been a busy boy this week.  He got another tooth (#3), has been eating purees more consistently, and loves being in the HKAFOs and dynamic stander.  He thought he was big stuff this evening with measuring cups and a spoon to stir with. 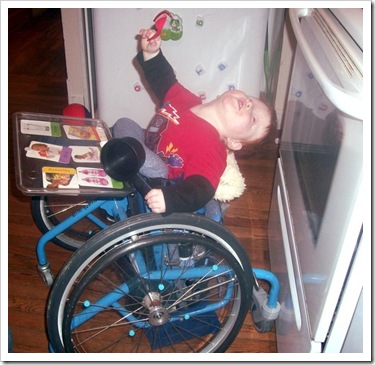 Then he started being silly, bending backward to see what was on the ceiling.  Other than some cobwebs there isn’t much to see.  I finally got a decent picture from the front of Mason in just his HKAFOs.  I thought I would walk you through the straps we have to fasten.  All use velcro.

First is the waist.

This is the easiest by far because it is large and on the side of his body.  Then going down his legs are thigh cuffs, with loops to slide the velcro through on his inner thighs before folding back to fasten.  On his right knee you’ll see a strap that is not on his left.  This has a loop to slide through on his inner thigh toward the back off the leather of the thigh cuff before fastening back on itself.  It’s the hardest to get in quickly.  This one provides a little backward pressure and a good amount of sideways pressure angling that knee back into position.  Next both legs have calf straps, simple to fasten.  Finally we reach his feet, where the strap for each must be looped criss-cross around under the foot before fastening behind his ankle.  Phew!  Once he’s in there he’s not coming out.  Mason really dislikes the time it takes to lay down while we fasten all those straps, but once he’s in and upright he’s happy.

We’ve worked up to being in the braces/stander for about 40 minutes at a time.  Yay!