This morning Mason and I made the hour long trek in to Children’s Hospital for appointments.  First Mason had a brain ultrasound.  The tech was really nice moved the bed out of the way so I could just wheel Mason’s double stroller next to the ultrasound machine and he could stay in his carseat for the ultrasound.  He was mostly asleep and so she suggested it.  It worked great! 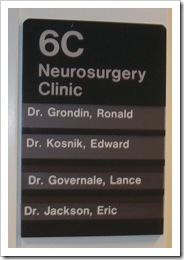 His next stop was the 6th floor to see the neurosurgeon for a checkup and review of the ultrasound that we had just done.  Everything (back closure, shunt incision site, abdomen incision for shunt, and ultrasound) looked good.  It’s a huge blessing that we’ve made it almost two months with no shunt problems.  I know we have years and years ahead where it may get clogged or need replaced, which means another brain surgery, but for now everything is working.

Our neurosurgeon also mentioned sometime in this first year he’ll order an MRI for Mason.  The practice is deciding what age they want to do that at.  Basically it is for a baseline so as Mason grows they can see changes in his brain, skull, and spine.  Mason will have to be sedated for this, it’s a slow procedure (taking pictures slice by slice of almost his entire body) and he can’t move or the pictures are blurry.  That will be interesting.  For now we have plans to go back for another brain ultrasound check in 2.5 months.

We had hoped to see the wound care specialist as well for Mason’s bottom.  Unfortunately she was called in to work on a severe burn victim who was sedated.  She expected that to take 1-2 hours so Mason and I headed home instead.  She’s supposed to call me this afternoon to chat about solutions for Mason’s skin breakdown.  I’m praying she has some wonderful solution.  We’ll see.