Mason's eye surgery recovery is going well.  He's feeling perfectly normal even though his eyes still look very red.  He is also doing fine on his tendon release recovery and still has a cast on his foot for 3 weeks and 2 days more.  Yep, I'm counting down.  It's hard for him to not be allowed to crawl around, climb stairs, or get himself into and out of his wheelchair or on and off the couch.  We'll be so happy when that cast comes off. 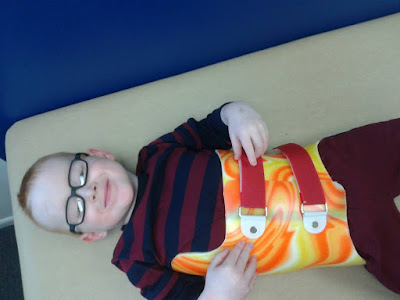 Today Mason got to pick up his sleeping brace.  This is new territory for us and I have no idea how it will go.  The brace basically pushes Mason's spine into proper alignment instead of leaving it curved the way his scoliosis has it.  He wears all night long. 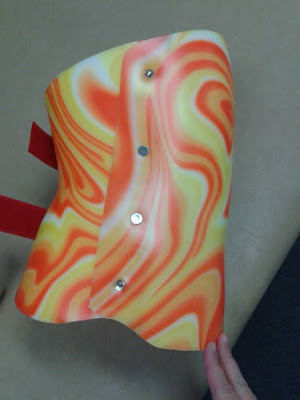 The view of the back of the brace.

The goal of the brace is to slow down the progression of Mason's scoliosis.  The more his curve increases the more it will affect him physically.  In the end, the curve may reach a degree where we will need to seriously consider surgery to put rods on Mason's spine, a spinal fusion.  That is a surgery we want to avoid for as long as possible, if not all together, because it tends to have serious drawbacks, often including lifelong pain management.  Of course, when the alternative is enduring a severe scoliosis curve that squeezes your organs and damages them or prevents you from breathing fully it makes that surgery a real consideration.  We are not near that stage. 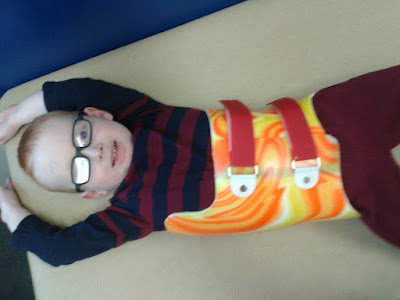 Mason chose the pattern for his brace, happy that it had orange.  He was enthusiastic to try it on.  I'm not sure how enthusiastic he's going to be once he realizes he'll be sleeping in one of these for years, until his skeletal growth is complete.

I have a few things to figure out now, as always happens with new equipment.

Mason has a follow up with the orthotist in two weeks to tweak the brace if needed.  I've also got a call in to the orthopedic surgeon who ordered the brace to see if they want us to bring it in 3 weeks when Mason gets his cast off.  They probably will want to do an xray while Mason is wearing the brace to check that it is correctly straightening the curve in his spine when he's using it.

Phew!  Lots of little things going on.  Now I'm off to bed.  Have a wonderful week!