Today was another new stop on the path for Mason – his first measurements for bracing.  I forgot to bring my camera (of course).  It’s okay, I would have been too busy with Mason to take pictures anyway.  Mason is being fitted for HKAFOs: Hip Knee Ankle Foot Orthotics.  These braces will make it possible for Mason to stand in one place, practice weight bearing on his legs, and do activities at a new height, such as a low table or the couch.

Measuring was fairly straightforward.  First he had an outline of his lower body traced onto paper.  His waist, hips, and thighs were measured and recorded, as was his inseam.  This was the part he hated, funny enough.  Mason does NOT appreciate being laid down on a table for anything.  He cried the entire time this was going on.  These measurements will be used for the metal parts of the braces along his legs, the straps, and the waist belt.

Next was the part I would have cried over had it been me.  He sat on Mommy’s lap and the orthotist got right in front of him and put casts on his lower legs (knees to toes).  Touching, bending, lifting, wrapping, and holding his feet in position as they dried – not a cry did he make!  Silly boy.  Then the casts were cut off along the front.  These will be used to make the AFO portion of his HKAFOs.  This is a molded plastic that fits his legs and feet, holding them in a ‘standing’ position, with more straps and with the metal attaching to these.  We decided to go ahead and choose a fun pattern for this plastic part – you’ll see it when things are finished.

That was all for today’s visit.  In 4-6 weeks we will go back to the orthotist for our fitting and come home with a new piece of equipment for Mason to enjoy.  I have tried to picture what it will be like to see Mason standing and I honestly can’t.  He’s never put weight on his legs – ever.  His muscles simply don’t work.  Mason certainly doesn’t care – he’s the happiest little boy I’ve ever known.

He is 11 months old today.  I cannot believe we have nearly survived the first year.  I took this picture today.  If you’ve been reading Mason’s story for long you’ll notice something he’s learning to do.  It’s even bigger than standing: 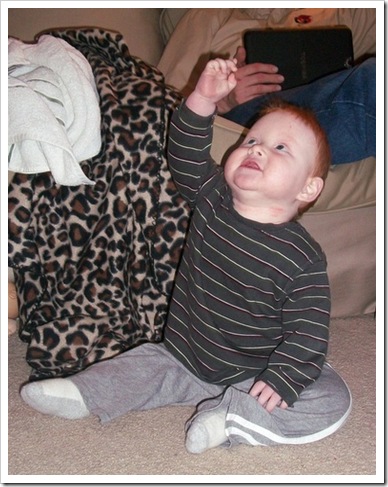 That’s right – Mason is sitting up straight and only using ONE hand to support himself.  We are seeing him sit up straight more and more often instead of leaning over on both hands.  See, here is another picture with his very straight sitting: 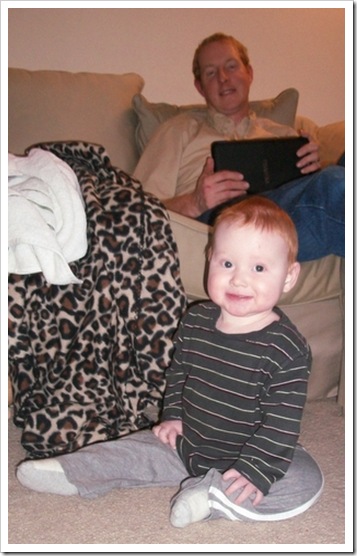 He’s such a strong cutie!  He loses his balance occasionally when trying to reach with one hand but is able to recover more often than he falls over.  We’re making progress with all the physical therapy we do.  Slow progress, but progress!  I’m eternally grateful that Mason just looks at the physical therapy as more playtime.  One of these days he may actually be able to sit and use both hands to play at the same time.  Think about it – how many things do you do that take both hands being free?  It will open up a whole new world to Mason.