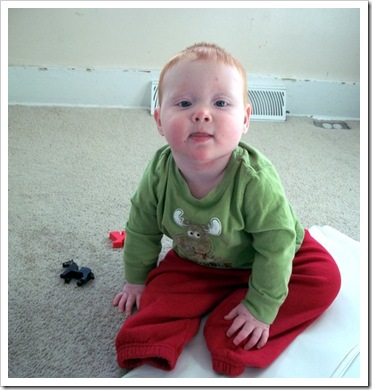 One of the hardest things right now with Mason is never knowing when something is really wrong with his shunt.  It’s such a weird process.  Sometimes you just know, which has been our experience the last few times.  This week we’re just not sure if his shunt is failing or if he’s just having an off week.

For the last several days Mason’s fontanel (soft spot) on top of his head has been a little bit bulgy.  That means there is more fluid in his brain than usual and the shunt may be starting to clog.  It usually flattens and empties after a few hours.  Yesterday it was really hard and full in the morning, flattened out, and then was a bit bulgy on and off all day.  He’s been cranky.  Today he woke up with a really hard and full fontanel again and when he drank his bottle he threw up the entire thing all over mommy.  He’s also seemed pretty sleepy today, just wants held, and is ‘off’.

Many of the symptoms of shunt failure in an infant are just what we’re seeing:

Unfortunately most of those symptoms could also be attributed to a cold, virus, or even teething!  For now we are hanging out watching Mason and trying to decide how long to let things go on until we put a call in to the Neurosurgeon on call.  As it is Sunday we’re trying to just wait and see if he gets better through the day like he has the last few days.  Then we’ll call the Neuro office tomorrow morning and let them know the weirdness going on.  Mason is supposed to be heading in for scans and checkups at the very end of this month.  They may have us just keep watching him until then or they may decide to bring him in early for checking.

Sigh.  I can’t wait until Mason can talk well enough to tell us just how he’s feeling.  For now we’re just going to have to continue our shunt watch and pray that things keep working the way they’re supposed to.