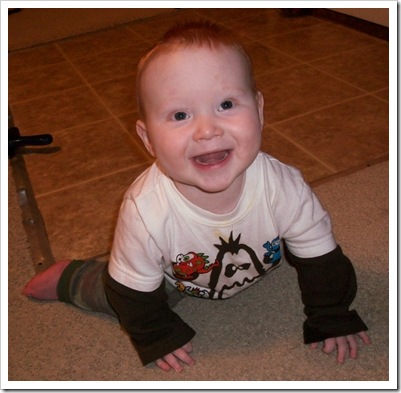 Is it really November?  Time moves so fast and this weekend Mason turned 10 months old.  I cannot believe that he is that close to a year old.  What a whirlwind this first year has been.  Today his new shunt turned 1 month old.  We’re trying to celebrate these little milestones.

What is new with Mason?

In short, not much.  He is still not able to sit independently without propping on his hands.  I’ve got specific things to check into when we go to Myelo Clinic at the end of the month related to that.  He doesn’t seem to be using those lower back muscles at all to straighten up.  It means this is likely going to be one of those very slow to achieve physical milestones for Mason – if he even manages it at all.  At the moment we’re hoping he is able to learn how to sit up independently by the time he’s a year and a half.

For now it affects things in small ways.  He can’t play with two hands while sitting up.  This means developmental achievements that involve both hands are not going to happen.  His hands are busy holding himself up.  He is starting to prop with one hand and hold something in the other some of the time.

He can’t sit in a cart at the store.  Even with the seatbelt he can’t balance enough.  We either need a lot of blankets wedging him upright or he has to be carried or in a stroller.  Certainly puts a crimp on those trips to the store alone with all the kids for me.

He can’t sit at the table in his booster seat without the tray attached (the seatbelt isn’t enough support).  He’s decided that his Bumbo seat doesn’t cut it anymore unless it’s his wheelchair one.  Who wants the regular one with no wheels to play with?

One neat thing we’re seeing is Mason experimenting with the Bumbo Wheelchair.  He still can’t get it to go where he wants it to, and using it on carpet will take some more strength.  But on the tile or wood floors Mason pushes and pulls one wheel at a time and moves around.  He thinks he’s hot stuff when he does this – and he is!  Smart boy.

His personality is still a cheerful, bright-eyed guy.  He has a definite need for Mommy snuggles when he’s ready to go to sleep.  He is also playing around with dropping his second nap.  Not cool!