Today Mason’s physical therapist was in to check up on how my little man is doing with all the physical therapy we do ourselves and to answer any questions we have.  She was very pleased.  Apparently it seems she has a lot of trouble with some parents actually following through with the PT exercises on a daily basis.  I just don’t understand that!  If there is something you can do to help your child, wouldn’t you do it?  Anyway….before she had even reached her car after the visit Mason was asleep in my arms, he was so worn out!  I put him in the swing so I could get a picture of his tired little face: 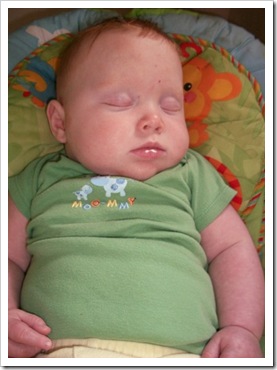 Mason’s range of motion in his legs is doing well with what we’ve been trying.  He is a bit tight in his hips and thighs when you try stretching those across the midline of his body, or when you rotate them in towards each other.  We’re to keep working on our passive range of motion exercises for that at each diaper change.

He’s still pretty closed-fisted and we think we’ve figured out why.  When Mason is very well supported sitting up he does relax his hands.  When he’s sat in the Bumbo or on your lap in a way where he’s having to do a lot of work keeping upright he is so busy doing that he can’t relax his hands.

The plan to help with that is a bit round-about, but makes sense when you think about it.  We’re to keep working on strengthening his trunk, as well as helping him start weight-bearing on his arms (pushing up).  The stronger he gets close to his body the more he’ll relax and work on the extremities (hands, fingers).  We’ve seen Mason begin trying to push up a bit the last week, so she showed us how to work with him from where he’s at.

Rolling practice is also in the works.  We’re to take advantage of his attempts to roll by passively patterning him from belly to back.  What that means is when Mason is on his belly and trying to lean to one side and roll over we assist just enough to help him make it.  Over and over and over on both sides.  We will also help him learn to ‘tip over’ from being pushed up on his hands into a roll.  For that you help him shift his weight to the side while on his hands and support him as his body naturally follows.