Part of the Physical Therapy Routine

Mason’s blog is a bit quiet lately because there is not much new going on.  Drinking an ounce of apple juice daily has resolved his constipation issues.   Mason seems to have inherited the sensitive skin several siblings have and it is a daily battle to keep his eczema under control.  It is pretty much at a stalemate.  We can’t get rid of it, we are just doing our best to keep it from getting worse.  He is still as cheerful as ever and still sleeps through the night – a blessing I don’t take lightly.

I thought I would give a peek at some of the physical therapy exercises he’s working on, we do these several times a day, plus a few others I didn’t get pictures of. 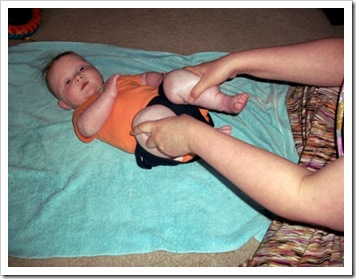 Hip Flex – With wearing the brace all the time his hips are constantly turned out.  He also can’t pull his own legs into this position when the brace is off, so we do it for him to stretch things.  When he pulls his legs up they fall to the side like a frog. 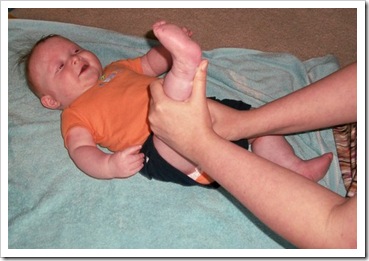 Straight Leg Stretch – This is one of the exercises to work on straightening those knees.  Mason doesn’t move at the knee on his own at all. 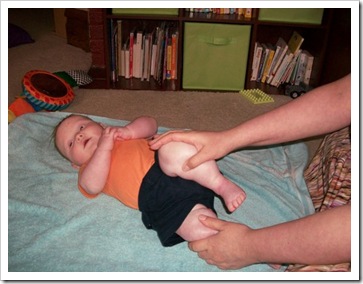 Hip Crossover – Trying to keep those thigh muscles flexible while not putting too much pressure on the hip joins and popping the hips out of their sockets. 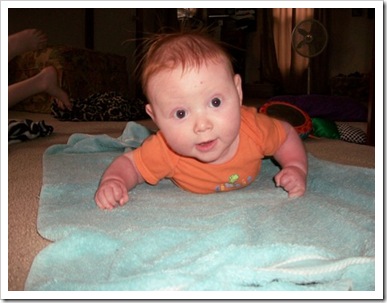 Tummy time – This leads to several things.  He’s slowly learning to push up on his arms to lift his chest off the floor, but he still does these airplane arms a lot.  He’s also begun learning to roll.  Makayla helped me get pictures of that process to share. 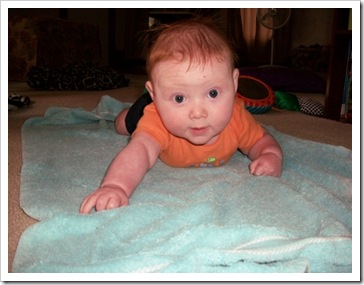 Step 1: Decide he wants off his tummy and extend one arm. 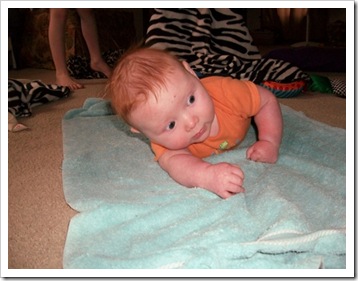 Step 2: Fall over on the arm and try to roll.  Try pushing the other fist into the floor to help. 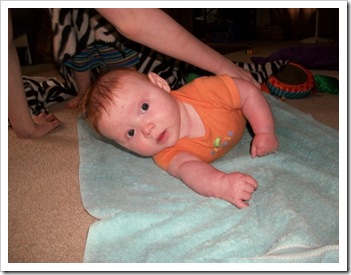 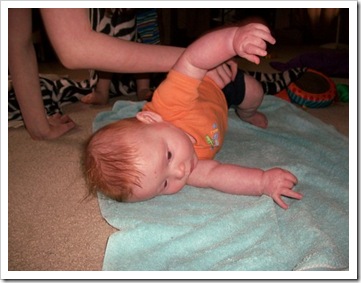 Step 4: Begin pulling his hip over, offering only enough support to counterbalance those heavy, non-functioning legs. 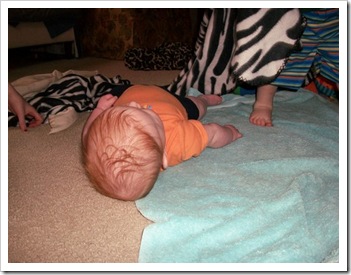 Step 5:  Let him do the rest of the work using his abdomen to get onto his back completely.

Then we work the other way, supporting his hip to roll from back to belly, but I didn’t get pictures of that.  We practice rolling to the left and to the right, but he has a clear preference to roll to his right so far.  I wonder if he’ll be right handed?  The thing I’m most excited about the last 2 weeks is that Mason is starting to initiate the roll from belly to back by doing step 1 and step 2 voluntarily.  It’s just a tiny portion of the goal skill, and he may not make it past that step on his own for months now as he tries to strengthen that core, but I’m celebrating every step. 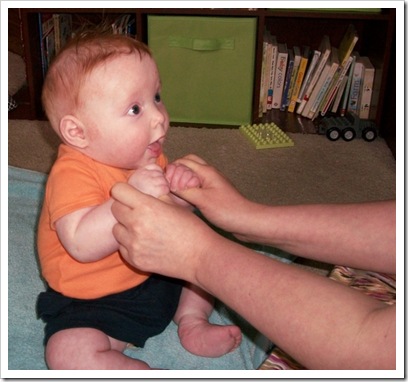 We got one last picture, this is after pulling Mason from laying to sitting.  He’s much more stable in this relatively unsupported position but has a long way to go.  He enjoys it though!