I realized I never posted about Mason’s physical therapy plan and yesterday Mason also had a visit to the orthotist/protestician to adjust his foot brace.  I’m just going to do a combination post to cover both.

At the moment Mason’s physical therapy consists of just a few things.  We’re working on his neck strength and flexibility first and foremost.  (Learn more about why here). 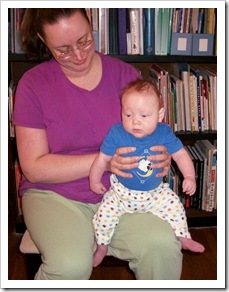 Actual physical therapy for that consists of:
The other thing we’re currently working on physical therapy-wise is flexibility in his legs.  Mason’s movement goes down to use of his hips but he doesn’t seem to have feeling in his legs (possibly some in his thighs), and he does not move anything below his thighs.  That means he’s not stretching out his legs at the knee on his own.  Ever.  When you try to straighten his legs the knees aren’t flexible enough to get to a neutral/totally straight position.  They got really bad during the casting for his clubfeet and we’ve been working with them ever since to loosen them up.  Basically PT for that involves stretching his legs for him.  It’s slow but steady changes.
More physical therapy goals will come along as Mason grows.  For example, we know learning to roll over will be a process because Mason is considered a parapalegic – below his hips he has no real sense of touch or ability to move.  That means his upper body and abdomen will need to be extra strong to compensate and we’ll do some PT to help him.

This seems like a never-ending process.  Due to the clubfeet Mason’s feet are not shaped normally on the bone level, as well as where the fat pads are.  They’re okay, but a bit different.  That has been causing us some trouble with the shoes on his brace.  While Mason’s feet are really flexible at the ankle (a huge blessing) his heel bone is not as prominent.  This makes it hard for the back of each shoe to ‘catch’ his heels and keep the feet from slipping up off the bottom of the shoe.
In our first round of adjustments the orthotist added two areas of padding to the shoe.  One was on the tongue of the shoe to help push down his foot. 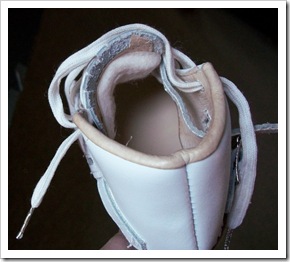 The other was around the back of the shoe to help catch each heel.  Between those and the shoe’s buckle and ties we hoped we were set but it didn’t fix the problem.
In this latest round of adjustments Dr. B added another soft strip of white padding like a ridge on the peach colored heel pad already in place. 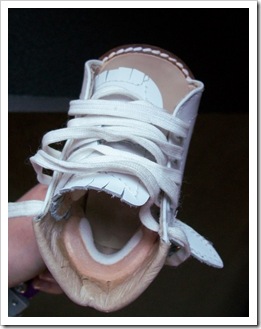 We’re hoping this will finally catch those heels and keep the foot from slipping up.
It is a balancing act at this point.  We need to apply enough pressure to hold the foot in place.  We also need to not apply too much pressure and cause sores on Mason’s feet or cut off blood circulation.  With Mason not able to feel his feet he can’t let us know if he’s uncomfortable or hurting.  That means for a few days I have to take off the brace throughout the day and check that his feet look okay and sore free.  If this last adjustment works we’ll be set for a while, until Mason outgrows the width of his bar or his feet get bigger and we need to start removing padding or size up the shoes.
Who knew fitting a shoe could be so involved?!
Posted by Tristan at 9:15 AM