Head Shape and Another Doctor?!?! 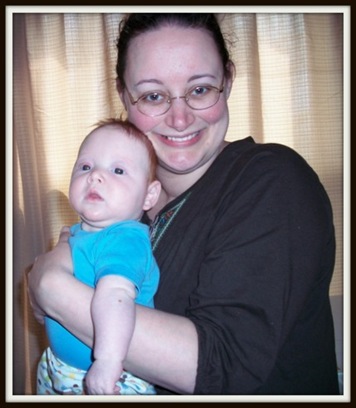 Life has been rolling along on a fairly even keel so there has been little to do in the way of updates until today.  Mason is growing like a chubby puppy, already weighing 13 lb 13 oz.  He has finally discovered his smile.

Today Mason had an appointment with Dr. P, the plastic surgeon who helped close his back the day he was born.  His back looks great and has healed well.  The ‘dog ears’ of skin on either side of the scar are still there, though one side has flattened out some as he has grown.  We’ll leave those intact until he is at least a year old and has made it through this first year of rapid growth.

The other thing Dr. P was checking today was the shape of Mason’s head.  Mason started out life with a funny head shape due to the spina bifida and hydrocephalus (a bit oblong like a lemon).  Then he had his shunt put in on the right side of his head, adding a lump to his head.  Like many babies who have a shunt placed, Mason does not like to turn his head to the side the shunt is in and lay on it.  He can, but he doesn’t like it.

That can cause a few issues.  First, muscle weakness on the side he’s not using.  Second, flat spots or misshaped skull growth, which also makes the brain grow misshaped (or more misshaped than it is due to his spina bifida and arnold chiari malformation).  We’ve begun physical therapy to work on the muscle strength, but Dr. P needed to check out Mason’s head shape for a baseline so we can track progress.  After his examination he emphasized a few things and is setting us up with yet another doctor.

First, we want to do all we can to avoid needing a pressure helmet to help reshape Mason’s head.  If he continues to favor the left side his head will get flatter/more misshappen.  Treatment for that is a pressure helmet, but putting pressure on Mason’s shunt could be a really bad idea.  It can mess with the function of the valve (causing fluid backup and brain damage) or could even split open the skin over his shunt. 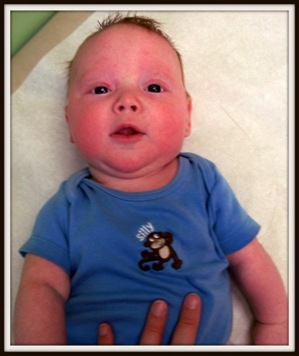 The plan is to aggressively work with Mason every day on turning to and laying on the right side of his head too.  We’re supposed to:

There is one other thing Dr. P wants to check and it’s Mason’s vision.  All the therapy and work we could do will not help if the underlying problem is visual.  Basically, if one eye is stronger than the other the baby turns to the strong side much more often than looking straight ahead or to both sides equally.  They see better with that eye and so things on that side naturally draw and keep their attention better.  This can compound the head shape issues because he’ll just keep turning that way.

Dr. P noticed that when I’m holding Mason upright he still tends to look to his left.  He’s not spending most of the upright time focused on what is right in front of him, and if you offer something in front or to the right side he’ll still turn to the left to look at something instead very often.  That is what led him to want Mason’s vision checked.  So we’ll be meeting with a developmental pediatric opthomologist (I think that was the technical name).

If it turns out Mason does have one eye much stronger than the other the general course of treatment is putting a patch over the dominant eye to force the child to use and strengthen the weaker eye’s muscles.  That patching routine could last weeks or months.  I really don’t know.

I’ll be honest, I’m praying that Mason’s vision is normal.  I just want one less thing to deal with.  I know that God has a plan for Mason.  I know that God created this specific body for my sweet son for His glory and our learning.  So for now I’m acting in faith that God will heal what He will and that He’ll help us get through each day with what we must.  If it means one more doctor to learn from and more therapies to execute, so be it.  Mason’s an enormous blessing and I’m learning so much from being his mommy!