What a whirlwind of a week!  Obviously the 31 Days of Spina Bifida Awareness got tossed out the window by real life with SB.  Consider this your next lesson on SB – you never know when something will change and your plans get set aside!  For those who have caught my short, picture-less posts let me reassure you that Mason is feeling much better.  Wednesday in the early morning hours we recognized Mason was showing signs of shunt failure and Mommy and Grandma took him to the Children’s Hospital Emergency Room while Daddy stayed home to care for the six older children. 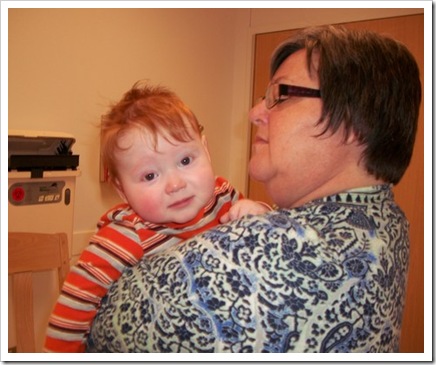 Here is Mason and Grandma in the ER, you can tell he’s feeling miserable.  It didn’t help that every time he drifted off to sleep they came to poke, prod, and pester him.  Over the first four hours Mason had an X-ray series (to confirm all 3 parts of the shunt were still attached and in place) and a head CT to check the size of his ventricles (fluid spaces in the brain) and compare to his most recent scans.  These all involved strapping Mason down or pinning him and he screamed and cried for each.

The verdict – shunt failure.  They spent the next hour and a half trying to get labs drawn and an IV started.  Mmmhmm.  They blew 3 veins and called the IV team, who finally got it done.  Meanwhile imagine a screaming, crying, angry little man who doesn’t understand why they’re poking him so much.  And a stressed mommy and grandma who hate listening to it and trying to comfort him. 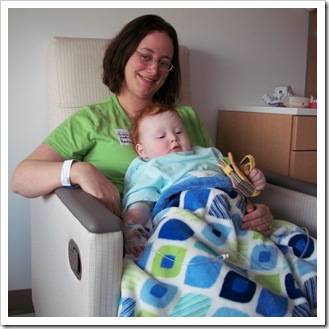 We made it to the Neurology floor and tried to relax until surgery.  He had his shunt revision and everything went textbook perfect. 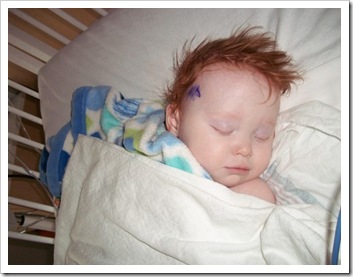 Mason had a crescent incision over his old incision: 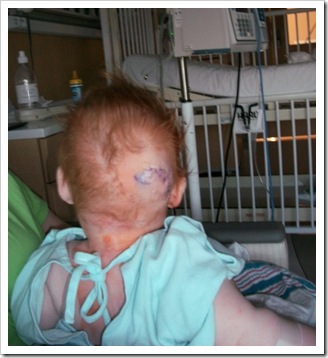 Except that the shunt didn’t work.  At all.  Nobody could figure out why.  We did an MRI on Thursday and were asked to stay another night.  Friday morning his fontanel was bulging more and another MRI revealed nothing was better.  Surgery #2 was scheduled for a little later that morning with the plan to place the catheter tube in a different position in the ventricle.

After a longer than expected wait during Mason’s surgery Dr. J came out to say, “The adventure continues.”  During surgery they shaved a small spot on top of Mason’s head to use ultrasound to guide the catheter into a new position.  Mason’s ventricles collapsed, empty of fluid, so the ultrasound couldn’t work.  They left Mason under anesthesia and sent him for a CT scan to check placement of the catheter.  If it was in the wrong place they would have opened his head back up to try again.

The CT showed everything where they wanted it so surgery was done.  Now we just had to wait and see if the shunt would work.  I think in this instance a picture answers that question pretty well.  Remember how miserable Mason looked when he came in?  Here he was less than 12 hours after his second brain surgery: 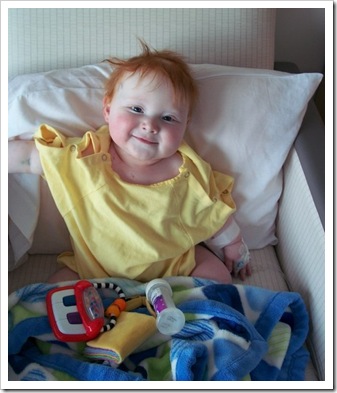 He was feeling so much better!  Life with Spina bifida is messy, but this smile makes it all worth it!Mason liked sitting in this chair and playing with Mommy right in front of him to make sure he was steady: 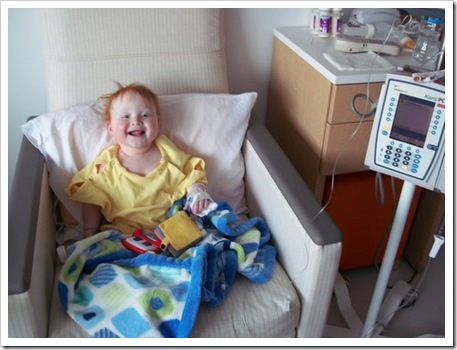 We had to get the IV placed in the other hand during this time and wait wait wait. Oh, and he pulled out the IV cord today to try and convince the nurses he was ready to go home.  No dice.  He had to get it back and finish those antibiotics.

The count is as follows: 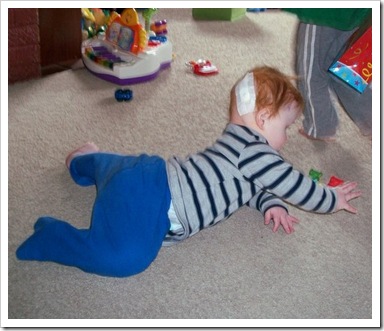 And now we’re home. He’ll wear the dressing for a week, get a checkup in two weeks and another MRI in a month to establish his new ‘normal scan’.  Mason is playing happily and we are praying this shunt lasts for years and years.