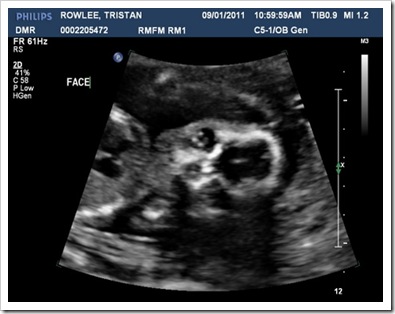 This week has been the beginning of a new journey for my family.  On August 30, 2011 at a routine 19 week ultrasound we learned that our seventh child is a boy.  We also learned he has Spina Bifida and club feet.  It was a shock, not something I had any experience with.  That evening I received a priesthood blessing.  While there have been many times in my life when I have felt comforted by what I hear in a blessing, this was different.  I was calm, truly I felt as if God was putting me in a little bubble so I wouldn’t panic, but the blessing only confirmed in my heart that this is not going to be an easy journey.  There was no promise of healing, that the troubles would all go away.  Instead I was promised physical health and strength to bear this burden, that it will be used to draw my family closer together, and that God was with me and with my son.  I was told this is no accident, God planned this path for our family, and gave this body to my son to accomplish God’s purposes.  I know that His plan is the best one, though it is often not the path we would have asked to walk.  Our son’s name is Mason.

Two days later, on Thursday, my husband Jason and I went to Riverside Methodist Hospital for a high level ultrasound to confirm the diagnosis and see what we’re facing.  My dear mother stayed home with our six other children, ages 10, 6, 5, 3, 2, and 9 months.  To say it was an information overload is to put things mildly.  We first met with a genetic counselor who took our family histories.  We happen to have nothing that would predispose us to this or any other genetic condition, which is great.  She also talked with us about the probability of the doctor wanting to do an amniocentesis today.  That is where they stick a needle into the uterus and draw out some of the fluid surrounding the baby to run genetic testing on.  We let her know that was not our first choice, but that we were open to what the doctor felt was necessary to get the best picture of what Mason is facing.

Next we were taken to our ultrasound.  The lady preforming the ultrasound was a gem – she asked what we had been told and walked us through each part of our son’s ultrasound.  She explained what we were seeing and smiled with us over Mason’s energetic antics in the womb.  After about 40 minutes of ultrasound she left to bring in the doctor.

Doctor Fox and two students came in.  Again, they did not assume anything, they asked what we knew.  After looking at the pictures from the ultrasound Dr. Fox did his own ultrasound to see it all “live”.  He explained what he was seeing and then after he was done sat down to talk with us.  He asked some questions, and answered some of ours.  He was aware of the fact that this is our tenth pregnancy and we have six living children at home, so he only one made reference to to option to “terminate the pregnancy”, and that was said along the lines of “I’m assuming you are very religious and not interested in terminating the pregnancy?”  I was grateful that he did not choose to pursue that line of discussion after our affirmation.  He also did not feel there was anything in the ultrasound indicating that we needed to do an amnio – hooray!

Mason has a condition called Spina Bifida Myelomeningocele.  As he was developing in the womb the spinal vertebrae in his lower back did not close and part of his spinal cord and nerves are coming out through this opening in his back.   We believe it begins between the L2 and L3 vertebrae.  This will affect several things, including his ability to walk and bladder/bowel control.  His feet are turning inward due to incorrect or inoperative nerve messages, also known as clubfoot.  He may learn to walk with assistance like braces or he may be in a wheelchair, we do not know yet.  The other major effect he will face due to the spina bifida is in his brain/skull.  The brain is a bit pulled to the back of his skull and so the flow of fluid around the brain is not as smooth as could be.  He will likely have Hydroencephalis, where fluid builds up around his brain due to the reduced flow, and will need a shunt surgically placed in his skull under the skin, with a tube under his skin draining off excess fluid.  There may be learning difficulties down the road (about a 20% chance).  When/if hydroencephalis begins in utero he will need delivered, which means he may be premature.  I will deliver via C-Section at Riverside Methodist Hospital.

Mason will require surgery within hours or a day of birth at another hospital to close the opening in his spine and to place a shunt in the skull.  We have yet to meet with the pediatric neurosurgeon to learn details of what that will involve.  Mason will be in Children's hospital's NICU for 1 1/2 to 2 weeks if everything goes perfectly.  If he’s born premature or has difficulties with surgery/recovery it could be longer.  He will likely require more surgeries as he grows.  The clubfeet are treatable to some degree, and again, we'll be talking with the neurosugeon about that as we go along.

For the moment I will continue to have regular prenatal appointments in my home town AND High Level Ultrasounds monthly in the big sity to monitor things.  We will begin gathering a pediatric neurosugeon team and preparing for the changes that are coming.

What We're Grateful For:

Mason is an otherwise healthy little boy, and while his Spina Bifida and all that entails will be hard, he is going to live.  Many of the possibilities Mason could have had in combination with his Spina Bifida (genetic/chromosome) had an end result of very early death.  It seems that God has planned a path for our yet-to-be born son that will not be the easy, healthy one you always assume will come at birth.  The challenges he will face come from his physical body.  As we are learning more about the challenges we are clinging to the knowledge that this child is known by God and that the circumstances of his body are not an accident.  “Before I formed thee in the belly I knew thee; and before thou camest forth out of the womb I sanctified thee…” Jeremiah 1:5

I plan to journal here the journey down this path.