This is Saturday and the one difference for the weekend during bootcamp is you do NOT go get an x-ray each morning.  Today Mason had zero poop accidents before his evening enema - yay!  He played hard, even cried over something when he was upset, and no poop. 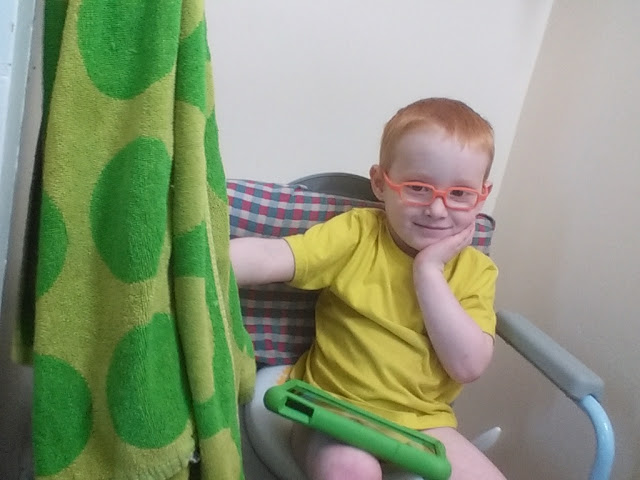 For the enema itself we kept the same fluid mix as yesterday: 400mL saline + 30mL glycerin.  I (Mom) was on my own to do the enema as Daddy was gone for the evening.  Mason had a small amount of fluid leaking around the balloon near the end of his 10 minutes of holding the fluid in.  No big deal, the catheter stayed in place and didn't fall out (which I've heard can happen).  After the 10 minutes it was just a matter of time waiting for things to come back out.  Mason sits for a total of 60 minutes from start to finish.  Usually he's playing Starfall on the Kindle Fire or watching a cartoon.

What We Think of the Process So Far:

I like the foley balloon enema setup for the simple reason that I don't have to hold it in place for 10 minutes like the cone enema.  It is a bit more complicated than the cone because we have to inflate the balloon with a syringe, but nothing that is too difficult.

The fluid mix we're currently trying seems to be more effective than the water/mineral oil mix we used in the cone.  His body is actually pushing out the fluid and some of the poop just from the irritation the glycerin provides to Mason's colon.  He IS still coughing some near the end of sitting time to make sure he's gotten out the last of the fluid and poop.  The difference is that with the water/mineral oil mix he had to cough on and off the entire hour to get anything beyond pure liquid to come out.  So this is a step in the right direction.

We still have half a week of recording data and will be doing more x-rays to see if he's being cleaned out completely done on Monday, Tuesday, and Wednesday.

In other upcoming medical - Monday is Mason's 4th IV infusion for his osteoporosis.  He'll spend a few hours at Children's getting that done and then we'll have made it through the first year.  That means it's time for a checkup and another bone density scan to see what the medication has done.
Posted by Tristan at 7:48 PM