Mason was given a surgery time of nearly 1:00pm so we had a bit of an unusual night.  At 2:30am I woke him up for breakfast.  Have you ever done this before?  I may be the lone crazy surgery mom, but I wanted to put food in that belly of his in hopes that he would be just a bit less starving as our morning went on.  He had two slices of banana bread that Daddy made, a few bites of sausage, and a glass of milk.  As of 3:00am he was left with only water as his option if he got hungry/thirsty (and only until 9:00am).  Thankfully, we went upstairs after this super early breakfast and he went back to sleep!

He slept in a bit this morning. We played at home with his brothers and sisters until Grandma came at 9:15am.  Then it was time to head to the hospital an hour away for pre-op check in.  Our drive was uneventful except the hospital called to see if we would be ready to go into surgery earlier.  Yay! We listened to music from the movie Frozen and from Casting Crowns for the drive. 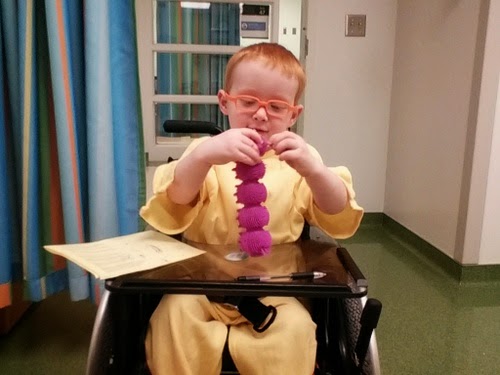 After check in they took us right back to pre-op.  Mason was happy to play. 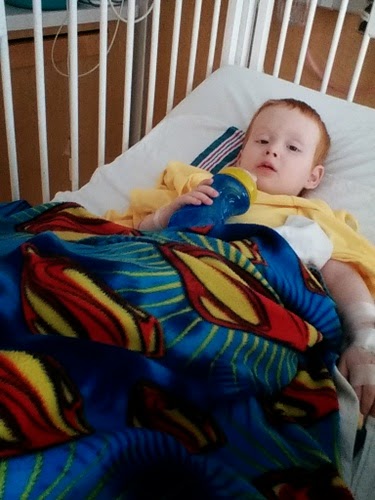 Surgery took less than three hours and I got this cutie back. 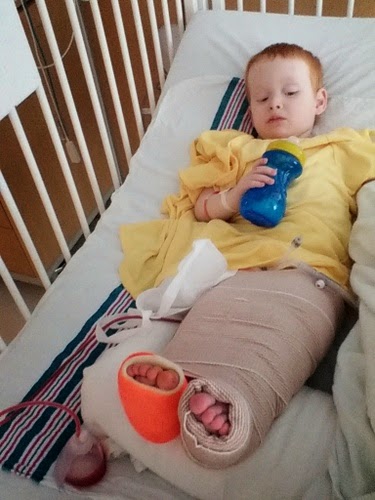 However, he was quite changed - Mason is now a merman!  The orange cast is a regular hard cast and that is the side his surgeries were on.  There is a dressing on his hip above the cast as well (and that is the area that hurts).  The other leg has a cotton cast with ace bandage wrap to protect it from being scraped up by the orange cast.  And then both legs are wrapped together mermaid style. 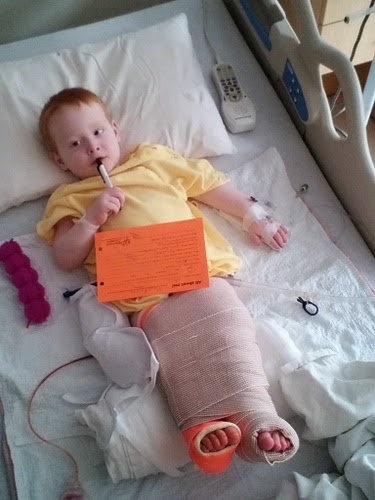 We managed Mason's pain as best we could and he slept well all night.  The next morning (Wednesday) he felt a bit better.  He spent time drawing and watching Curious George and Max and Ruby. 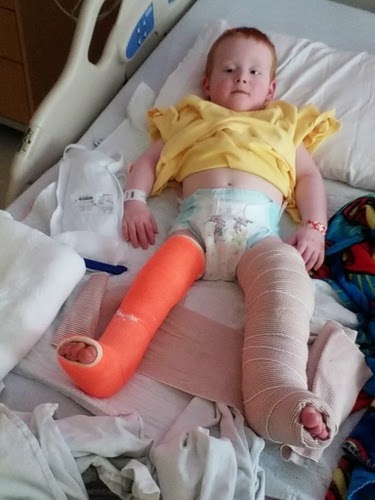 Here is what things look like under that ace bandage wrap.  When we need to catheterize Mason, change a diaper, do an enema, etc, we unwrap the ace bandage holding the legs together.  Other than that the plan is to stay wrapped like a merman for the next 6 weeks.  Mason is not thrilled. 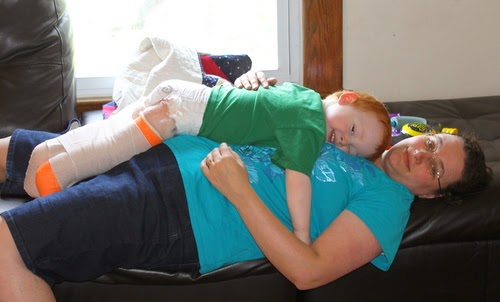 We came home this afternoon and at first Mason spent some time laying on Mommy.  He was adjusting to the noise and busyness of home. 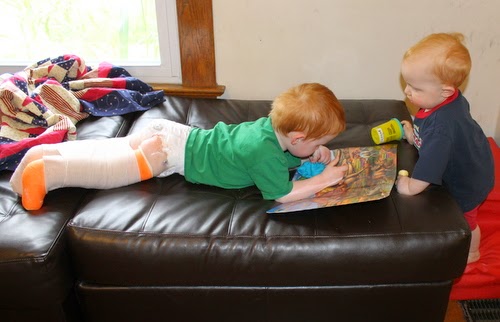 It did not take long before he started playing playdoh while laying on his tummy.  He did this for more than an hour.  The rest of the evening has been spent trying to keep him laying (on side, back, or belly).  He wants to sit up, to crawl around, to do anything but lay.  I do not know how we will keep him laying for so long but we'll figure something out.  (Funny fact - Mason can't wear pants or shorts for 6 weeks!  We're going to find some longer shirts from the big brothers but for today at least we have a lot of diaper bottom going on.)

We are pretty much housebound (Mason and Mommy) for the duration of the 6 weeks, other than a checkup with the orthopedic surgeon in 2 weeks.  He's not to spend time sitting in his car seat, sitting at the table (all eating is to be done laying down if possible), or sitting anywhere else, like in his wheelchair or at church.  I know that right now it seems like 6 weeks will last forever but in the big picture it's not that long.

At some future point I will share what we're trying for Mason's enemas.  At this point we're just doing trial and error to figure out how we can manage this without getting poopy fluid on his casts.  And I know some day I will laugh about it all.  Today is not that day.

While we try to find a way to make enemas work we also run a race against constipation.  Today we did not get much poop out at all.  We are watching his diet very carefully to avoid constipating foods, pushing fluids, giving miralax, and all the usual things.  I'm going to be talking with Children's Hospital tomorrow to see if anyone in other departments has ideas for how to manage the poopy business in a child whose body doesn't poop on its own.  Prayers are always appreciated!

In case you were wondering - it is wonderful to be home!  Wonderful to be surrounded by loved ones and to have some semblance of normal.  Mason wants upright and the only way that works at the moment is for me to hold him while I'm standing up.  He's really heavy with the cast!  The only other challenge right now is to work out ways to keep Mason safe.  At this point I have to be right beside him at all times.  If I need to leave the room one of the older 3 children have to sit right beside him.  He's already figured out how to roll over, to crawl (which we're discouraging for a few more days at least while the hip closes up some), and he's not figured out how to judge distance when he's rolling to ensure he won't fall off the couch.  We can put him on the floor (wood floors) but then we're still dealing with the sitting up/crawling and we have more risk of Samuel climbing on Mason's hip/legs.    It seriously limits what can be done by me (cooking, settling sibling squabbles, checking on the walking 1 year old, cleaning, going to the bathroom...ahem).  Again, we've done this sort of watch before just a few months ago when Mason had his spinal cord detethering, so it can be done, we just need new routines worked out and it will take a few days.