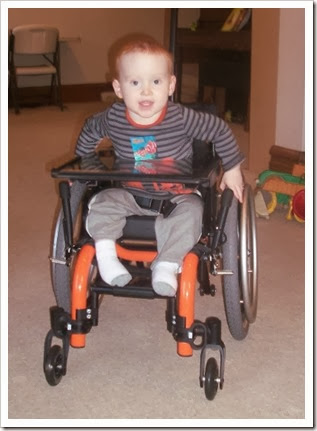 Today Mason and Mommy spent a few hours at Children’s Hospital for a checkup and to outline a plan.  While we have plastic surgery scheduled next week for Mason’s wound there are other more worrisome things on the horizon.  Mason had an MRI today to check out how the shunt is working since his revision last month.

While he had been calm and cheerful on his trek through the hospital and the waiting room, once he saw the MRI he panicked.  It was only last month that he had an MRI so he still remembered being strapped down in a noisy machine.

Have you ever had an MRI?  This big huge machine that makes a lot of noise has a tiny little tunnel that you are slid into while strapped down on a table.  For Mason, who needed a brain MRI, it meant his head was even strapped down so it was still enough for pictures.

I happen to be claustrophobic and not too keen on tunnels.  Today it didn’t matter.  Mason mattered.  So I did what any mom would do in my situation – I climbed up on the table he was strapped to and into the tiny tunnel we went together.  I was able to put my hands on his face and talk to him, he could see me and knew I was right with him.  What amazing trust he has – he relaxed and by the end was drifting off to sleep.  How humbling!

After our journey into the tunnel we wandered our way back across the hospital to see Dr. G, the neurosurgeon.  We saw the fish tank, visited with people in the halls, and finally made it to the door of Neurosurgery.  This is where Mason decided to assert his independence in nearly-two-year-old fashion.  I held the door open for him to wheel through and he refused.  As in, out and out told me no and locked his wheels.  I unlocked them and tried to push him in with the parent handle.  Nope, he grabbed the wheels so I couldn’t roll him forward. Tricky boy!

About five minutes later I was still holding that door open and he finally decided he was ready to go in.  I have finally figured out a drawback to his wheelchair independence – unlike a 2 year old who refuses to go where you want and can be picked up, it’s really too hard to pick up Mason in his wheelchair and carry him.

Oh well, it is really fun to see him assert his opinion and I knew eventually he would go in the office.  I just wasn’t sure how long I would have to wait him out.

One inside the waiting room we still had a LONG wait and Mason spent the time exploring.  He met a sweet girl in a medical stroller, pulled books off shelves, and threw papers in the trash.  Then we got to see Dr. G.

After some discussion we’ve learned:

We decided that because Mason shows no clinical symptoms of shunt failure we are going to wait for a month and redo the MRI to see if the fluid levels in his brain even out to appropriate amounts.  If they do we’ll skip the brain surgery and move on to the spine surgery.  If they do not we will do brain surgery first, recover, wait for things to stabilize with the shunt in his brain, and then move on to the detethering of his spinal cord.   We are also cleared to go ahead with his plastic surgery to close up his wound next week.

What We’re Praying For

Phew, it’s a lot to take in at once, isn’t it?  I’ve talked about detethering before and if you missed that just know it’s got some big risks.  Scary big.  It also has become apparent that we’re going to need to do it anyway.  If you have any questions about Mason or his medical things feel free to ask in the comments!