Friday Mason headed back to Myelo Clinic for a wound checkup.  I was not sure what to expect for two reasons:

It turns out things look fine, I was right to stop the plastic and duoderm layers, and we’re to continue with just the gauze and tape.  We are to change the gauze/tape at every diaper change, spray with KeraCleanse and fill the wound with the Kerasanz gel.  They will see us in 3 weeks and we’ll go from there.  It is likely to be a few months before this heals completely but we’re on the right track.  The rash – it’s yeast from the extra layers so we’re using Nystatin cream twice a day to clear that up.

While in Myelo clinic we worked on a few other things so let me explain those too.

First, we got a prescription written for Mason to get a new set of HKAFOs made.  His are too small now.  If you remember last time he had to get casts done for each leg/foot as well as his back/butt/abdomen.  Then they custom make the pieces which takes several weeks.  Monday I’ll be calling the prostetist/orthotist to get the measurement and casting appointment scheduled.

Next we chatted with the ‘poop lady’.  We’ve adjusted Mason’s miralax dose so that his poop is no longer super soft/unformed because we want to keep poop off the bandage.  Unfortunately, just like I told them, he can’t poop on his own if it’s solid at all.  They sent us home with a cone enema kit and we’re beginning nightly enemas for Mason. 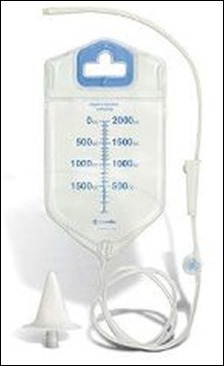 What’s a cone enema?  Basically you put a liquid solution (ours is water and mineral oil) in a bag attached to a tube that goes in Mason’s bottom.  Because Mason has no muscle tone to hold the fluid in and allow it to work there is a rubber cone at the end of the tube.  It is inserted a bit into the bottom and when we close the tube’s lock it acts as a stopper to keep the fluid in.  Remove the cone and the fluid all comes back out, hopefully with the poop. Again, the no muscle tone means we have to sit there and hold the cone in place for him for the five minutes, it won’t stay on it’s own.

We’re still trying to figure out how to do that on a potty with a child who can’t balance well enough to sit there, especially when we need to have access to his bottom to hold the cone in place.  So far it takes Daddy and Mommy both.  I’ll spare you the messy details for now, I just hope we get a routine going and this becomes easier SOON.

In case you’re wondering: Mason thinks it is all really fun because he’s on the potty in the bathroom, a novelty for him.  And he gets mommy and daddy’s undivided attention so it’s even better.

We also had an evaluation with the occupational therapists at Myelo clinic.  It had been over 6 months since our last eval.  Mason has made huge strides since then, such as actually eating solid food by mouth.  He is also not where they expect a child to be in using both hands simultaneously because, of course, he still struggles with balance and core/trunk strength.  They are pleased with the progress he has made and said to keep doing what we’re doing.

All in all it was a good visit.  We got to meet a little guy about Mason’s age and they played together (wheelchair bumper cars – too cute!).  We got things accomplished and I came home feeling like the visit was helpful even though it added more ‘special needs’ medical care to our daily routine with the enemas.