Day 3: Are there different kinds of Spina Bifida? 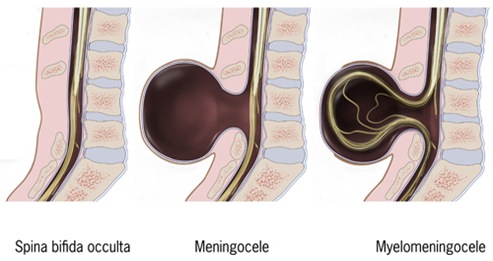 Like most physical disabilities there are a few types of spina bifida.  The three most common types are pictured above.  I’ll describe each briefly before sharing more about Mason’s particular type.

This is the mildest form, often called “hidden Spina Bifida”. There is a small gap in the spine but no opening on the back. The spinal sac, cord, and nerves stay in place in the spinal column.  It usually does not cause symptoms and often goes undetected.

In this type of SB a sac of fluid comes through an opening in the baby’s back but the spinal cord and nerves stay in place in the body. There is usually little nerve damage.

This is the most severe form of SB.  In this form part of the spinal cord and nerves come through the back and may or may not have a sac intact around them.  It causes moderate to severe nerve damage and disabilities based on which nerves are affected.  From areas of numbness, bladder and bowel control issues, and muscle weakness up to paralysis.  Seventy to ninety percent of children with this condition also have too much fluid on their brains, known as hydrocephalus. This happens because the brain forms toward the back of the skull as the spinal cord is tugging it due to being out of place.  Known as Arnold Chiari II Malformation, the fluid that protects the brain and spinal cord is unable to drain like it should. The fluid builds up, causing pressure and swelling. Without treatment brain damage will result.

A Piece of Our Story:

Mason has the most severe type of Spina Bifida: Myelomeningocele.  He was born with an opening in his back through which you could literally see his spinal cord and the unfinished edges of some of his spinal vertebrae. 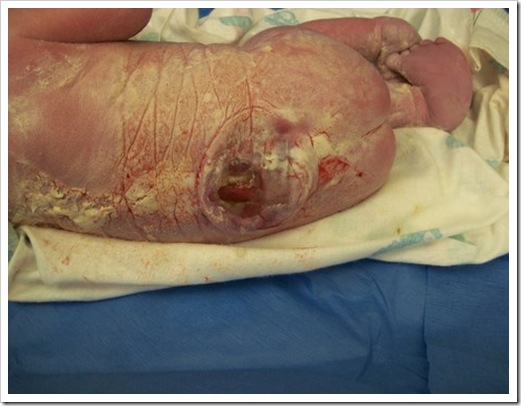 The red in the center is Mason’s spinal cord.  The yellowish-white around that are vertebrae that did not close.  The sac surrounding it had ruptured before birth. 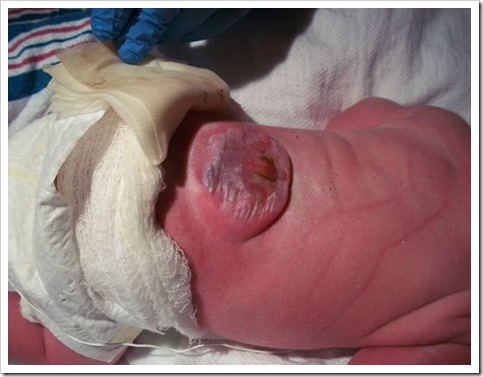 This picture shows his back a few hours later, before surgery.  You can see now that there was extra skin and some purplish durum (the sac that is supposed to enclose the spinal cord) but there is a hole in the durum.  It has puffed up as his body tried to fill it with fluid.

There is a wide variety of severity with Myelomeningocele.  Even children whose back share an opening in the same vertebrae will have different degrees of disability.  The reason for that is the way God created our nervous system.  I’ll share more about that tomorrow!