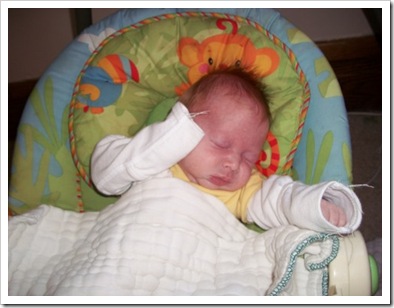 Mason was weighed this morning at the pediatrician’s office.  The weight is not accurate because he has those casts on his legs still but he is gaining weight.  At his last visit to the pediatrician (pre-casts) he weighed 7lb 11oz.  The casts together weigh just under 1lb and today Mason weighed over 9lbs.

He wasn’t too impressed by this visit – he got circumcised today.  We got the okay from all the various doctors at Myelo Clinic last Friday and wanted to get it done.  It is the first time I’ve watched the whole procedure.  Quite an interesting experience, to say the least.  Now we’re hoping for an uneventful recovery time.  I’ve already had to catheterize Mason once since he was circumcised this morning.  Everything certainly looks like it hurts but he didn’t do too badly during the process.

Other than that there is not much going on here.  Mason is in a semi-regular sleep pattern that has a longer stretch at night of about 3 1/2 to 4 hours.  His long awake/alert times are still pretty random.  He usually has one nice long period being awake and alert in the late afternoon or evening, but the others sometimes fall in the morning or in the really early morning (think 2:00am-4:00am).  He’s still a sweet, mellow boy in general.

Umm, it depends on what time of day you ask me!  The hardest times by far are in the evening or at night when I’ve not had enough sleep.  This week will be my first big challenge because my husband will be driving 4 out of 5 days at work (instead of in the office 4 out of 5).  His sleep schedule is awful when he’s got to drive!  This week he’ll need to be in bed around 7:00pm every night.  That leaves me with 7 kids to get to bed alone, a tricky feat when three of them are under age 3 and need mommy for a good bit of the bedtime routine.  Then I’m up with Mason a few times overnight and right now I’m up with Caleb too – the poor guy has 5 teeth that are coming out of the gums right now, 3 of which are molars.  He’s miserable and wants company.  Life’s never boring with children!