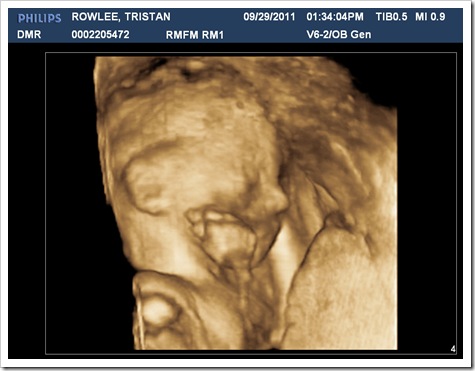 I got to see Mason today – it was ultrasound day!  Even better - the sonographer decided to try a 3D ultrasound to see if she could get a better picture of Mason’s spine.  That didn’t work out, but while she had the 3D ultrasound running she showed me around and gave me this sweet photo of Mason’s face, with a little fist in by his cheek.

He was moving a lot, so it was hard to get good measurements today, but everything looks to be right on track with Mason weighing about 1 pound 5 ounces.  So far there he is not developing hydrocephalis (fluid backing up around the brain) which is wonderful.  The longer he can grow in my womb the better off he’ll be.

I met a second perinatologist today, chatted up what we could see on ultrasound, answered questions.  I got a bit of a laugh when he asked if this was my first boy.  The poor guy had obviously reviewed Mason’s information but not mine.  He about fell off his stool when I said Mason is my 5th boy.  Then I gleefully told him I have two girls at home as well.  He added it up out loud and then wanted to know how old my oldest was and if I had any multiples (twins).  “So you’ve pretty much been pregnant all the time for the last 10 years?” he asked.  “Yep.”  “Well it seems to work for you.”

My next 3 ultrasounds are now scheduled, and I’ll be meeting the neonatologist at the hospital who will be the one caring for Mason as soon as he is delivered (and up until he is transferred to Children’s for surgery).  All in all everything is going ‘normally’ outside of the spina bifida, chiari malformation and bilateral clubfeet, which is what we want.  The plan is to enjoy the next four weeks and then go check on Mason with another ultrasound, so I’m off to do just that!