Day 4: Why the Variety in SB Disability?

Welcome back to 31 Days of Spina Bifida Awareness: Day Four! 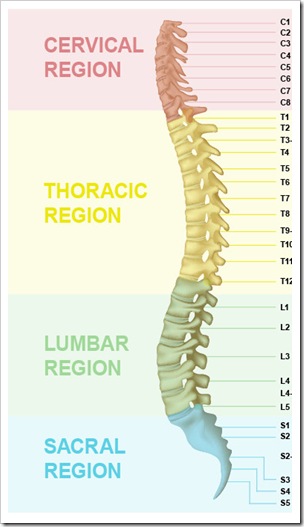 God created our nervous system in an amazing way.  All along the spinal cord are nerves branching out.  Different nerves handle different parts of the body, and the nerves often handle different sides of the body as well.  So, for example, one nerve may be covering the sense of touch or movement for the left foot while a separate nerve covers the sense of touch for the right foot.  It gets even more complicated when you realize that one nerve may work with the muscles on the front of the thigh and a different nerve works with the muscle on the back of the thigh. This chart gives you a small idea of nerves and disabilities at different levels of the spine : 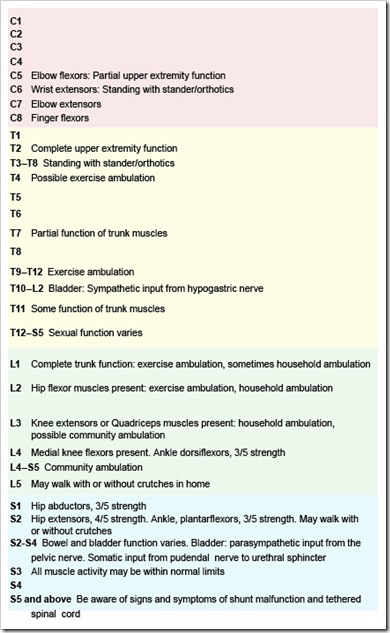 In Spina Bifida the opening in the vertebrae gives you an idea of the potential areas of the body that may be affected.  Each person varies in how much damage was done to each nerve.  They may have different abilities on each side of the body.  Their body may also have fewer or more nerves affected than you would assume based on the areas of their opening.  This is called their Functional Level.

A Piece of Our Story

What we know so far is that Mason’s opening/lesion level begins at the L2 vertebra.  Each vertebra under that is open down into his sacral vertebrae.  We are not sure exactly where it closes in the sacrum.  All children with this lesion level have bladder and bowel issues.  Some walk with short leg braces extending to their knees.  Others don’t.  Some can use their knees and hips, others don’t.  It depends on which nerves were damaged.

With Mason being only eight and a half months old he cannot tell us anything.  We have to go by what we see when trying to know if he can feel anything on different parts of his body.  We have to watch what he does to see the muscles he can use.  These lead us to guess at a functional level.

Mason’s functional level seems to be a T12 - worse, or higher up, than his Lesion Level.   He has no sense of touch in his bottom, hips, or legs.  He cannot feel his lower back or abdomen.  How do we check?  We do the normal thing for parents – tickle him – and get no response.  We have other clues, such as the fact that he doesn’t cry when he gets vaccines (shots) in his thighs.

Mason can use some muscles in the front of his thighs – the ones that pull the leg up.  One leg is weaker at this than the other meaning the nerves were affected to different degrees.  Mason never straightens his leg back out at the thigh.  He never wiggles, bends, or kicks at the knee, ankle, or toes.

Mason does pee on his own but lacks any control.  This works both ways – he cannot get all the urine out (empty his bladder completely) and cannot keep from peeing when he laughs, cries, or uses his abdominal muscles trying to sit or roll.  We catheterize Mason 3 times a day to empty out the bladder.  What will this mean down the road?  We’ll have to see.

In the bowel department things are similar.  He poops constantly if the stool is soft.  Any muscle use in his abs causes him to leak poop.  He also can get constipated very easily.  Mason never does the typical “strain and grunt” baby routine to poop.  If constipated the only way that poop will come out for now is A) if he’s crying hard and it gets pushed out accidentally or B) with the help of glycerin suppositories or an enema.  Down the road Mason may be able to learn to ‘push’ using his abdominal muscles on purpose and poop, but he will likely end up on an enema routine combined with Miralax to help avoid constipation.

It amazes me the interplay of body systems and how one thing can impact so many others.  I’ll share more about that in a few days.