Today Mason had his long-awaited checkup with the Orthopedic Surgeon for his clubfeet.  You can see more posts about Mason’s casting and bracing process for his clubfeet right here.  After checking Mason over and asking some questions we were delighted to learn that we’ve graduated to a new bracing schedule.  YAY! 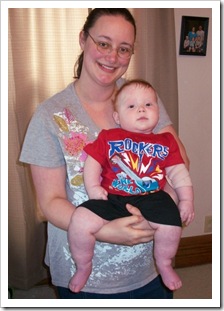 Instead of wearing his foot brace for 23 hours per day he will only wear it for bedtime (about 9pm to waking in the morning).  We are so excited for many reasons:

Mason is growing so quickly.  He is nearly 6 1/2 months old.  He is very curious and wants to know what is going on around him.  This makes him very distractible and lately he’s too busy checking out sounds and people to bother finishing a bottle.  As in, he never finishes one.  He has just barely started to pay attention when we’re eating meals so we decided to offer him a bit of oatmeal yesterday at dinner. 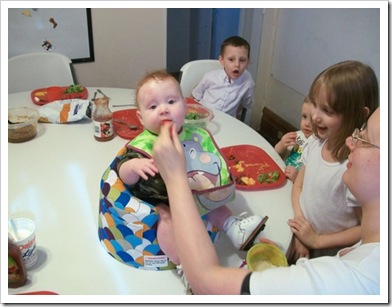 He wasn’t terribly impressed.  I can’t say I blame him.  It went in and after mouthing it a bit the oatmeal came right back out.  We’re going to hold off on food for now and try again in a few weeks, but we’re in no rush. 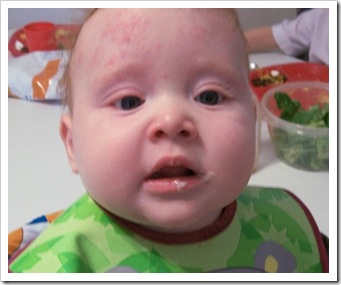 That’s pretty much it for updates until tomorrow when we meet with his physical therapist!